Can You Drop Metal Darts From a Drone?

Drones are awesome. You can use them to get fantastic camera shots, spy on your neighbors, and even… drop dangerous objects to the ground?! Yeah, Alex Apollonov of I Did A Thing is back at it again. Upon getting his hands on his very own drone, the first thought that came to his mind was: “Could I drop assassin darts using this?” 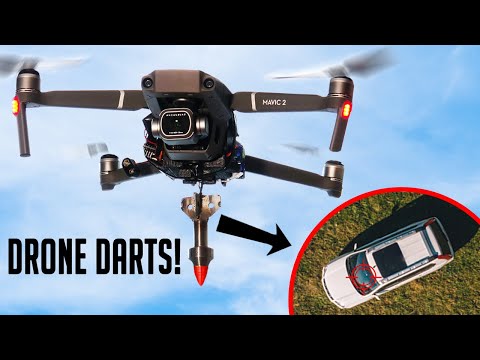 The darts took inspiration from lazy dogs – tiny kinetic projectiles used by the U.S. during the Korean and Vietnam wars. Alex made his homemade darts out of 1045 medium-tensile carbon steel. After shaping several different-sized darts on his lathe, he welded stabilizing fins to make them drop more accurately. He also welded hooks to the end of these fins, which would help with the next part of his project.

You can’t manually drop a dart from a drone while it’s hovering a hundred meters above the ground, so Alex repurposed some code he found online and put it into an Arduino microcontroller.

When combined with a servo motor and a light sensor, the microcontroller would unlatch a hook whenever the drone light is shined on a specific area. This made everything easy for Alex since it would just be a matter of turning on the drone light to drop his darts.

After miniaturizing the components and storing them onto a 3D-printed cradle, his dart drone looked more suspicious with every new modification.

How To Aim a Dart Drone

All this ammunition would go to waste if you couldn’t hit anything with it, so Alex thought up multiple ways to get his drone to drop darts accurately.

He first looked to lasers but then thought twice after almost blinding himself. The laser wouldn’t also be visible enough from the heights Alex was planning to drop his darts from. Those ideas just made his project more complicated, so he resorted to a more straightforward solution: the drone’s onboard GPS.

Time To Drop Some Darts

With his drone completed, Alex tried to find some Twitter subscribers who would be willing to let him drop darts on their plot of land. After finding one, he took his drone up to 25-, 50-, and 100-meter heights and began dropping his homemade darts.

The darts became more and more inaccurate the farther they flew away from the ground, as you would expect. But whenever one of these things hit their mark, they definitely did some damage.

When dropped from 50 meters, the dart penetrated the roof of a car. It didn’t go all the way through, as some of the fabric prevented it from hitting the car’s would-be passengers.

Taking it up to 100 meters was even more dangerous. Not only did the dart shatter the rear window, but it also wedged itself deep into the car frame and couldn’t be removed by hand.

It was pretty difficult to aim the darts accurately at such a height, but further testing proved just how dangerous these metal projectiles could be. Alex dropped another dart on the front window, after which it broke through the glass and sunk deep into the bottom of the car. If this dropped on your head while driving, not only would you be dead, but the unmanned vehicle would also cause damage to pedestrians and other drivers.

So there you have it. You can weaponize your drone with some heavy metal darts and drop them on passersby, but that would brand you a menace to society. Best stick enjoying its original purpose: taking magnificent drone shots.

Here Are the Different Uses of Bushcraft Knife