After watching a video of Prusa Research headquarters, it’s increasingly obvious that time is up for new 3D printer startups.

The video, produced by 3D printing YouTube Channel 3DMN and appearing below, is an informal tour of the Prusa Research manufacturing site, where that company produces thousands of desktop 3D printers each and every month.

It’s a fascinating watch, as it shows each step Prusa Research takes to manufacture their machines. Steps include component storage, physical assembly, electronics and of course, testing and quality control. 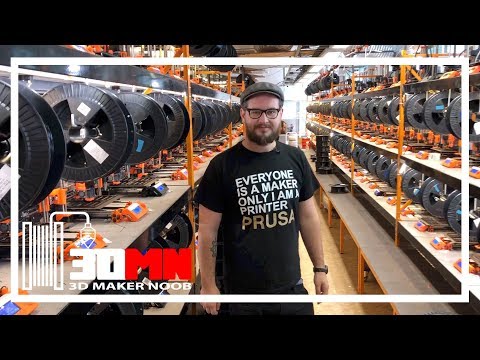 What’s most interesting is the scale of the operation. These steps each take up several large rooms in Prusa Research’s manufacturing center and are staffed by many workers. It’s a very impressive operation, and apparently, since the video was captured, Prusa Research has moved into even larger facilities.

But consider watching this video if you were contemplating setting up your own desktop 3D printer company. That is what you are up against.

Most desktop 3D printer startups we’ve seen over the past years have begun with a small gang in a basement workshop, where they’ve cobbled together a fully functional prototype. Buoyed by their technical success, the team launches their prototype as a product in hopes of growing dramatically.

However, such startups frequently encounter manufacturing issues, as small teams rarely have any experience building machines en masse for clients. It takes considerable skills and experience to juggle supply management, quality control, machine design, and more to enable a consistent production of equipment. Even worse, there are always unexpected issues that arise, such as a supplier problem, an unseen component deficiency or a financing complication. In spite of best efforts, most startups facing these issues would stumble.

Only a few survive, typically due to luck or experience in the right areas. In years past, these survivors grew into the larger companies we see today, like Ultimaker, LulzBot, Prusa Research and a few others.

They were able to grow because at that time there was little competition: there were no large 3D printer manufacturers, at least at the desktop scale.

But that is definitely no longer the case. The video shows the extent that Prusa Research has developed their sophisticated manufacturing lifecycle, but no doubt similar complex operations are in place at other major 3D printer manufacturers. In Asia, many 3D printer manufacturers are actually long-term manufacturers of other types of equipment, and thus adding a 3D printer is often a matter of simply another product for the experienced workers.

So to those able to build a prototype 3D printer, do not think it is an easy thing to launch it as a product. Making a prototype or two is an entirely different matter to consistently manufacturing hundreds or even thousands of units.

I used to suggest that desktop 3D printer startups had better come up with a very unique function or breakthrough price, but at this point in the lifecycle, I don’t even think those are possibilities anymore.

The race to the bottom has bled away any possibility of reasonable margin on manufactured desktop 3D printers, especially for a startup with low volumes and poor component buying power. Those attempting to compete on this basis recently have mostly failed as they don’t make enough money to survive. So price breakthroughs are not a thing anymore.

Function breakthroughs are a possibility, but they can also be developed by the larger companies, who likely have teams of people at this very moment doing that development. How can a small startup compete?

It seems we’ve reached a point where the barrier to successful entry to the desktop 3D print market will require a significant investment and effort to overcome these and other challenges. While investment was far less important in the past, it’s critical today for the desktop market. In that sense, it seems like the desktop market has caught up to the industrial and professional market, where this has been the case for a while.