As I type this, I look down at my naturally black keyboard and wonder just how much dirt and dust this thing has accumulated. It has been ten years since I bought it and I know without a doubt that my keyboard has amassed a ton of filth and I will never be motivated enough to clean it.

So if my 10-year-old keyboard is this bad, how much more can a 26-year-old Windows 95 keyboard be?

Upon being sent an ancient keyboard, French restoration YouTube channel TysyTube Restoration sought to bring this relic into the modern age. While he could easily slap a couple of adapters and use the keyboard out of the box, it wouldn’t be very hygienic to use something which hasn’t been cleaned since the 90s.

So let the restoration process begin! 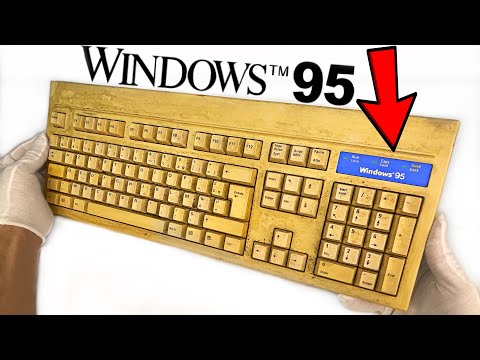 If you are a 90s kid like me, you most likely remember Microsoft’s keyboards being sickeningly yellow in color rather than their factory-issue grey/white. You have the keyboard’s designers to thank for that. While the keyboards themselves are well-built, the fact that they were lightly colored makes it easy for sweat and grime to stain and leave visible marks on the keyboard.

It’s going to take a lot of chemicals and time to deep clean this particular keyboard. Luckily, our man is up to the task. After disassembling the keyboard, TysyTube separates the electronics from the plastic and rubber components. Since it would be inadvisable to soak the electronics in liquids, he sets them aside and cleans them off-screen (probably with a brush or a compressed air can).

He dunks the plastic and rubber parts into some water mixed with detergent. Using a paintbrush, he cleans each piece using the bristles to reach into the cracks and crevices of the keyboard pieces. Once done, he scrubs them using a scouring pad and some baking soda.

You would think that the cleaning process would be done, with all the cleaning agents he just used. Well, TysyTube is just getting started.

Taking the Caps Lock key as a point of reference, he dunks the rest of the plastic and rubber keyboard parts into a plastic container filled with a 12% hydrogen peroxide mixture, which is a strong oxidizer and bleaching agent.

He adds some hot water into the mixture to help speed up the cleaning process before bringing out the big guns: two 50-watt UV lights aimed directly at the container. The UV rays increase the bleaching properties of the peroxide and help restore the keyboard’s original color.

TysyTube leaves the UV lights on overnight before removing the keys, rubber, and cable from the hydrogen peroxide mixture. After drying them, it’s just a matter of putting the keys in their rightful positions and screwing all the parts back together again.

With the untreated Caps Lock key in place, you can see just how much of a difference the UV-bleaching process has made. The yellow stains on the rest of the keyboard are completely gone, and it looks almost as if it was fresh out of the box. Of course, TysyTube cleans the last yellowish key as well before assembling the rest of the keyboard, completing the cleaning process.

The only thing left to do now is to attach a bunch of adapters so this 90s keyboard can be used on a modern laptop port. While it is a lot noisier and does not support other features as conventional keyboards, the Windows 95 keyboard still works like a dream on any computer. It will probably take only a few months before it returns to its yellow hue again, but I suppose that’s part of the keyboard’s overall charm.

TysyTube Restoration is a chock-full of restoration projects which include weapons, appliances, and old pieces of technology. Better check it out!