If you love playing games in the dark, then this will be right up your alley. High-tech toy start-up company TOSY has combined two throwing tools to create the TOSY Flying Duo: the ultimate outdoor LED light sport experience. 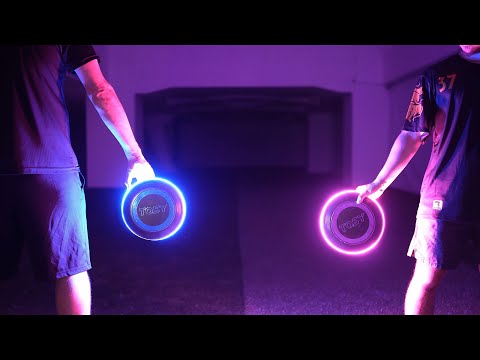 This all-in-one package is made up of two toys which fit perfectly together; making them easier to carry and charge.

For those who want a bit more competition, the timer modes determine how long the LED lights stay illuminated after being thrown. You can set them to light up for 0 seconds to 10 minutes for some chill rallies, but you can also set them to ‘Ultimate 7’ or ‘Ultimate 10’ for some added pressure.

When set to either of the two Ultimate modes, picking or catching the Flying Disc causes the LEDs to blink for each second that passes. Think of this as like a ticking time bomb. You have to pass the disc over to your teammate within the given time limit (7 seconds for Ultimate 7 and 10 seconds for Ultimate 10). When your time is up, the Flying Disc will glow a bright red – signalling a turnover to the other team. It sounds complicated when I describe it but just like with any sport, it’s much easier to understand when you play it yourself.

The other toy which makes up the TOSY Flying Duo is a boomerang – the lonely version of the Frisbee.

Just like the Flying Disc, the TOSY Boomerang has built-in LEDs which make it look even cooler in a night time setting. Unlike the Flying Disc though, this boomerang comes with its own launcher, further simplifying the process of tossing a toy that automatically comes back to you.

There isn’t quite as much to do with the boomerang, seeing as it’s mostly a one-man game, but it’s always mesmerizing when you launch it off into the distance only to see it come hurdling right back at you. Plus, you can even toss the boomerang at any flat surface and it will stick to it whilst spinning – just like a top.

The Flying Disc and the TOSY Boomerang are both waterproof and extremely durable. They can even be snapped together, making them extremely portable. Should you want to play with one of them, all you need is to snap them apart, charge the toys on the provided USB-C charger, and get tossing!

The Flying Disc has a 3.7V 500mAh Li-Po rechargeable battery and takes about 30 minutes to fully charge. Depending on the brightness level and timer mode you set it to, you can play on a full charge for hours before needing to recharge it again.

The Boomerang on the other hand, has a 3.7V 50mAh Li-Po rechargeable battery and also takes 30 minutes to completely charge. As it combines with the launcher, the Boomerang can only be played for about 45 minutes non-stop. It does have a charged lifespan of about 270 launches, which is more than enough for you to get your Boomerang fix before you get tired and move on to something else.

If you like running around in complete darkness, you can find more about these bright LED throwing toys on Kickstarter. The TOSY Flying Duo has already reached its funding goal of US$25,000, and currently has a funding of US$130,263.

Cheapest Canon Cameras to Buy This 2021