It takes a LOT of metal to smelt down a solid ingot and sometimes, those metals aren’t always readily available. Gold, for instance, is crazy expensive and you would need to melt a lot of jewelry just to create a single gold nugget.

Copper, on the other hand, is cheap and readily available; provided you know where to look for it. Luckily, one curious guy knows where to get some. 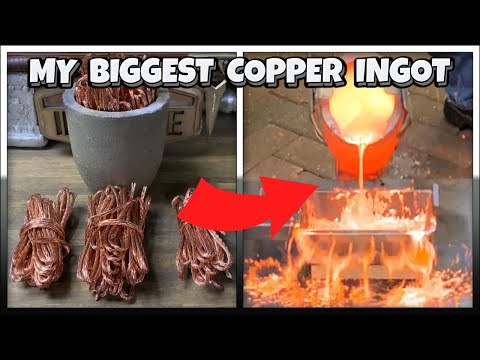 Due to his desperation to create the biggest copper ingot, YouTuber Ingot Joe considered using copper cables as an alternative… lots of copper cables.

Since the copper ingot had to be 99.9% copper, he decided to use a number of copper cables like the ones used to connect old-timey telephone lines. After stripping the insulation from the cables, he prepared them into bundles before smelting them.

To start the smelting process, he placed the first batch of copper into a crucible and set the gas pressure to 0.1 MPa. This allowed the furnace to reach a temperature hot enough to melt the copper.

In this process, you would start to see the flames inside of the furnace change from their usual orange to bright green. That means that the copper is starting to break down and combine with the gas inside.

After 15 minutes, Ingot Joe popped the furnace open and added another batch of copper to the already melted mixture inside. He also started mixing the melted copper with a metal tool to remove any solid pieces and ensure they didn’t coagulate.

He repeated this adding and mixing process a couple more times until all the copper bouquets melted down. Once all the copper had been liquefied, he turned the furnace off and prepared to cast his ingot.

You have to be reaaaaaally careful when pouring hot liquid metal, so Ingot Joe used his tongs to pick up his crucible and pour its contents into a mold. Unfortunately, the melted copper was a tad too heavy for one man to lift, and he ended up spilling some of the contents onto the side of the mold. Thankfully, he had the foresight to place some metal plating around the area surrounding his mold, preventing anything flammable from burning.

After pouring the liquid copper into the mold, he waited a while for it to solidify. Once the copper had cooled into a nice black, Ingot Joe removed it from the mold and placed it on a block of ice to speed up the cooling process.

The only thing left to do for him was to polish the copper to reveal its natural brownish color. Oh, and to weigh it in, of course!

Upon laying that fat block of copper on the weighing scale, we discovered why it was so hard to cast the liquid metal in the first place. It weighed a little over 10kg! That’s around the same weight as an average car tire!

Of course, the ingot is worth more than just a couple of car parts. He could sell it off but for now, Ingot Joe decides the best place for his new copper ingot is at the back of his work table – along with all his other creations.

Ingot Joe melts a lot of metals on his YouTube channel. Some of the metals he simply turns into ingots while others are crafted into some fine metalworks.