Count this one under one of the coolest engineering class projects, ever.

Aptly named the X-Plorer 1, the engine measures in at 75cm long with a diameter of 27cm, and weighs a total of 8.1kg. Over 50 student engineers are working to make over 965 printed parts, 300 fasteners, and ten integrated sensors that make up the final and functional assembly. 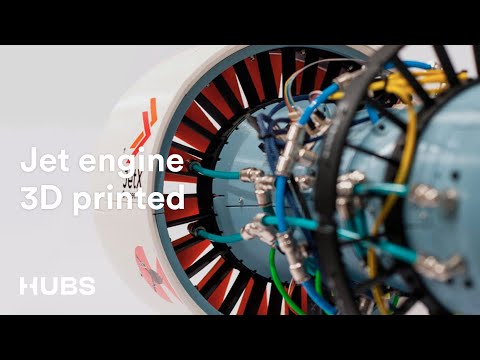 Once the initial tests are complete, the parts are crafted via a DreamMaker OverLord Pro, Delta FDM 3D printer, using different 3D printing materials including PLA, ABS, PETG, and Nylon. The smallest part of the X-Plorer 1 takes about seven minutes to print, while the main engine casing takes a whopping 58 hours to complete.

As to be expected, 3D printing the one-off engine parts is a heck of a lot cheaper, faster, and allows the JetX team to easily change parts in case better optimization opportunities present themselves.

What make this the first 3D printed jet engine of its kind? The X-Plorer 1 features a custom-built Engine Monitoring System (EMS) with a purpose-built software and user interface. This is the first one which features an array of sensors including temperature sensors, differential pressure sensors, LED rotational speed sensors, a vibration sensor and an airspeed sensor providing instant design feedback for the aerospace engineers working on the project. They can then take these learnings and continually iterate the project to come up with new and more efficient configuration for real-world scenarios.

The engine itself is electronic and completely fireless, making adjustments and analyses a lot easier. This leaves room for various improvements and lets the students experiment with their knowledge of aerospace engineering. Eventually, Chris hopes to turn the project into a competition between universities; where different schools will compete to make the most efficient engine possible.

The X-Plorer 1 isn’t the only thing JetX is working on. The team is already conceptualizing the upcoming X-Plorer 2 and a low bypass turbofan known as the Kronos. Be sure to check in on the team’s progress over at their website and learn more about the engine here.