We may have never gotten the chance to build the robots of our dreams as kids (tears), but that doesn’t necessarily mean our children of this generation should also miss out. 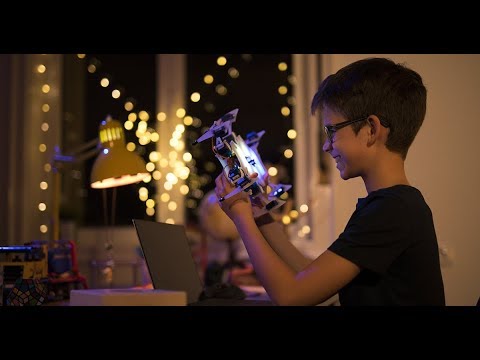 The STEMI Hexapod is a brilliant do-it-yourself robot. And before you go saying it looks like a mechanical spider, take note this robot only has six legs.

Each of those six legs (count ’em!) has three motors which work with the other appendages to give it lifelike movements. These connect to the body of the bot which serves as the housing for the main operating electronics.

The legs are programmed on a computer using various lines of code, which range from turning your little spiderbot on to having it move in different directions. It sounds pretty ho-hum on paper, but being able to control the angle, direction, and speed at which the Hexapod turns and moves adds a bit more personality than your average robot slave.

Controlling and programming the robot is usually done on a computer, but STEMI also lets you make your own mobile app to commandeer the Hexapod. While you won’t be doing a lot of programming on your phone (it seems better to do it on a computer), controlling the bot using the mobile onscreen thumb sticks looks a lot more intuitive than a mouse and keyboard.

If you don’t mind shelling out almost $400 ($314.32 as of the moment) for this robot to prepare your child for a job in manufacturing, then you can find it on the STEMI webpage.

Pay What You Want for This 10-Course Arduino Super Bundle