We’ve covered wood carvings before here on SolidSmack, but it’s not often we see them made out of a single piece of wood… nor this big.

Vlad Carving is a YouTube channel dedicated to the art of making giant wood carvings. In one of his videos, he carves a giant bust of a Native American, along with two wolf heads to keep it company: 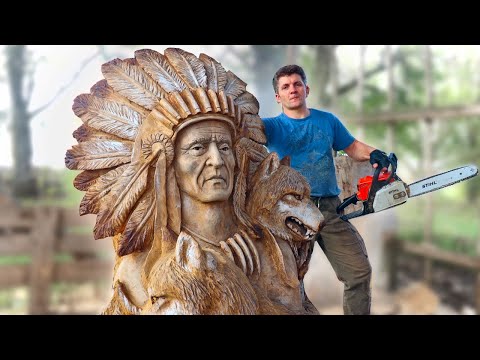 Going into details about the carving defeats the purpose of the entire video, which is to relax and watch as one man creates a masterpiece from scratch. But look closely and you will get to learn more about his creative process when it comes to making these giant works of wooden art.

For example, you’ll notice how he starts off with a rough sketch before drawing the base features onto the wood. Once the head of the Native American and the wolves are in place, he starts chipping away at the giant tree trunk.

Before the woodwork even begins, you’ll see that our man uses at least three different kinds of chainsaws. Swapping between these not only saves him from refuelling each chainsaw, but the different lengths and widths of guide bars allow him to cut the features of his Native American carving.

This brings me to another revelation: there is a surprising amount of chainsaw work involved in this particular piece. Now you would think that making such a fine piece of wood art would require more precise tools (it does), but the ratio of chainsaw work to chisel work seems to be about 1:1.

Features like the Native American’s furrowed brow, chin, and the wolves’ fur are all carved into the wood using different chainsaws. There is a bit of sketch work involved in order to provide a guide, but the actual cutting is done using only these man-made machines.

As the carving starts to reveal itself, more intricate details require more precise tools. Our man busts out the hammer and chisel and gets to working on the wolves’ teeth, and the Native American’s face and headdress.

It takes quite a bit of time and effort but once it’s finished, he lightly sands the carving before putting on some wood paint and finish.

My description of the video does not do it justice. It’s easier to get immersed in Vlad Carving’s… err, carving process if you watch it for yourself (preferably on a Sunday morning with a nice cup of hot chocolate). You can find more of his work on his YouTube channel.

This Knife’s Edge Is Made Using Replaceable Utility Blades