For anybody who can remember using an original Macintosh computer in the 1980s and early 1990s, few could argue that today’s Apple lineup of computers bares any resemblance to the early computers that helped make Apple a household name.

For a group of designers at the German tech blog CURVED, this was just as convincing of a reason as any other to design their own rendition of a modern day Apple computer that “[does not] deny its origin”.

“The Macintosh is a computer with history: with its first desktop computer “Lisa”, Apple Showed more than 30 years ago not only what what technically possible – the design of the iMac & Co. regularly cause [a] stir,” said the motivated tech bloggers.

While most will argue that the modern day Apple computers are based on technology advancements and needs of consumers rather than “origins”, CURVED/labs’ ‘Mac 2015’ is an interesting hybrid of yesterday’s molded plastic Macintosh computers and today’s precision-milled aluminum Macbook Air computers: 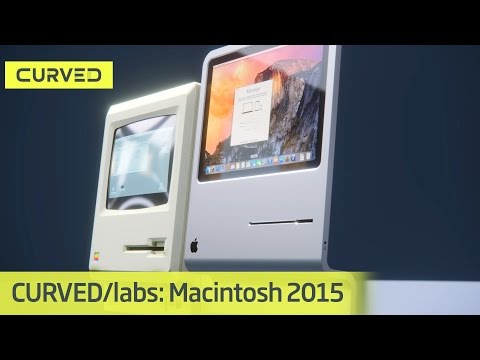 As for the actual build, the team used components taken from a 2014 Macbook Air and modified them to fit inside of a piece of bent aluminum that resembles more of the shape of 1984’s Macintosh than today’s 27″ Cinema Displays.

According to CURVED/labs, “An SSD flash memory with 128 gigabytes of storage is built in, either 4 or 8 gigabytes of memory are available. The CPU is the latest i7 chip from Intel. The casing is, of course, made of the same high quality as used for the aluminum MacBooks, iPhones and iPads.”

Sadly, the Mac 2015 isn’t for sale, however based on the attention it’s received thus far today…we wouldn’t be surprised if it was.