Straight wooden legs are cool, but curved wooden legs are even cooler. Unfortunately, it usually takes more wood to make the latter. This is why not all woodworkers spend too much attention on them. James Hamilton of Stumpy Nubs is not one of those folks.

In one of his projects, James showed an easy woodworking trick you can do to make a curved leg with the same amount of wood you would use to make a straight one. And the best part? All you need is a band saw, some wood glue, and a couple of clamps. 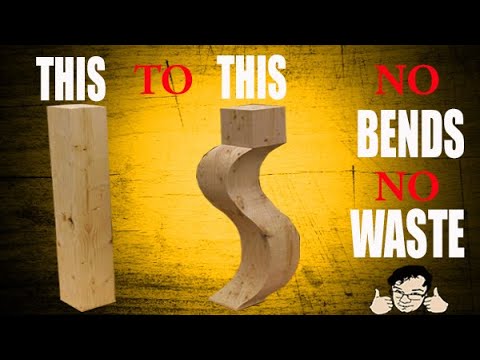 After milling your piece of wood, you want to trace a short straight line down one edge before drawing in your curve. Make sure your line stays within the confines of the wood, otherwise it will be difficult to curve it later. Once that’s done, cut your wood on a band saw with a narrow blade. This allows you to precisely cut the wood and make adjustments on the fly.

Once you’ve cut your wood into two, trace that curve onto a piece of paper. You will use this template to trace the same curve later. Now, tape the two pieces of wood together. Turn to the uncut or untaped side of the wood and use the template to imitate the same curve.

Take the newly traced piece of wood back to the band saw and cut it by following the line you’ve drawn. This will split the wood into two pieces again. Remove the tape and keep them grouped into two. While still separated into two halves, reverse the position of pieces in each half.

Glue the two halves first before connecting them together. Once ready, join the two halves like pieces of a jigsaw puzzle and you have yourself a curved leg! To assure that the glue will work, use a couple of clamps to hold the whole thing down.

Since working with the assembly of wood pieces can be a tad confusing for beginners, James recommends numbering each piece to make everything faster and easier.

James has also said that you don’t really need that stencil to make the second cut. If you want your curved leg to be a bit more free-form, make an entirely different cut than the first. The crazier and more different the curve is, the weirder the finished leg will be!

James Hamilton has a ton of these woodworking tips and tricks, all of which can be found on his YouTube channel, Stumpy Nubs. Be sure to check it out if you want to add some extra flair to your wood projects!