With his near-seamless ability to fuse traditional craftsmanship with modern technology, it’s no wonder designer Love Hultén consistently makes his way into mainstream media with his clever interpretations of retro arcade cabinets. Heck, one of his creations even ended up on the Tonight Show.

The Swedish designer, whose approach to design is to present genuine and attractive alternatives to contemporary appliances, creates and assembles all of his pieces by hand out of his Gothenburg, Sweden workshop.

The solid American walnut Cary42 is Hulten’s most recent example of fusing traditional craftsmanship with modern technology—and this time, he pulled out all the stops.

The two-player arcade console is inspired by attaché cases and is a larger version of his previous sold-out R-Kair-R console. Cary42 (carrier for two) leans heavily on classic co-op games (Metal Slug, Gauntlet, and Contra, among others), but comes installed with 100 classic game titles total. 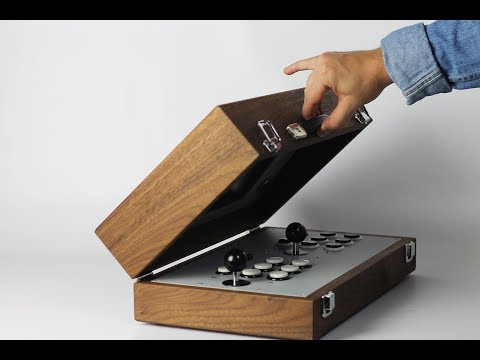 “I want my objects to create a state of curiosity – using references from both past and present, a blend much more interesting than just putting something on repeat,” explains the designer. “Nostalgia is involved to a certain extent, yes, but not by looking backward. It’s by taking steps in different directions simultaneously, creating unique and balanced objects.”

Find out more over at Love Hultén.