Over the past year or so, people have been doing their best to improve living conditions inside their homes. This is the “new normal” after all, so we might as well make the best of being cooped up in a single place for the time being.

One important aspect of home improvement is lighting; it can mean the difference between embracing the day with arms open wide or shunning humanity like Gollum from The Lord of The Rings.

In order to get some much-needed sunlight into his friend Josh’s son’s bedroom, Bob Clagett of I Like To Make Stuff collaborated with the man of the house to make some windows. Fake windows, to be exact: 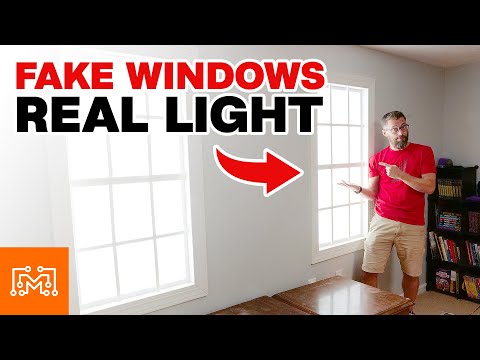 Since Josh’s son resides in a basement bedroom, he doesn’t have any form of natural sunlight. These “windows” the duo made are actually flat panel light boxes that were fitted into the wall and made to look like actual windows.

Doing the project only required Josh and Bob the simplest process.

After cutting out the appropriate holes and covering the exposed wires, they added in some wooden supports for the windows. The frames for the windows were made by taking the 2ft. x 4ft. LED light panels and encasing them in 1 x 1 boards.

To make the fake windows look more like windows, smaller wood pieces were used to create “muntins” – those strips of wood or metal which separate and support the glass panes of a window. After some caulking and paint, the fake windows were ready to be installed.

The cool thing about these fake windows is that their light sources can actually be dimmed to mimic actual sunrise and sundown. While the initial plan was to create a smart system that would automatically adjust for the time of day, the duo eventually settled on a system using a 110-volt input, 110-volt output, as well as a 0-10-volt dimmer output which can be controlled using a switch. They screwed the fake windows into place and added some frames on the side.

This lighting method works well in scenarios that could use a little more illumination. The panels work great, and they give off a light that isn’t too blinding and delivers that “fake sun” feel.

For more home improvement ideas, you can find more of Bob and Josh’s work on the I Like To Make Stuff YouTube channel. Their builds aren’t that hard to make, and you can use them in different scenarios as well!

Best GoPro Cameras for Sports and Underwater Video Projects in 2021

Best Cameras Under $200 for Casual Photography