While I’ve written about my fair share of dangerous products, none of them are inherently made to harm people. That changes right now, as science man and YouTuber Steve Mould covered an assassin teapot too cool to pass up. 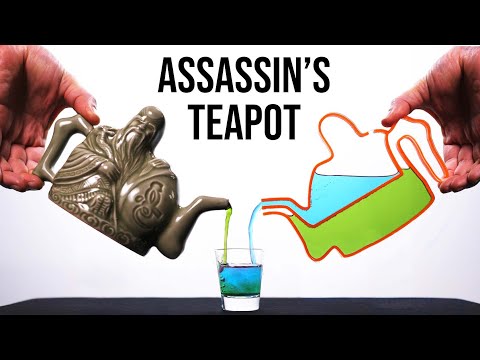 Originating in China, the assassin’s teapot was made to poison your enemies. It does this using two hidden chambers: one housing your standard drinkable drink and another holding your enemies’ just desserts (in drink form, of course).

Each chamber has a hidden hole somewhere near the teapot’s handle. To pour a specific drink out, you need to keep the hole connected to the chamber uncovered. You’ll want to keep your finger over the spot with the unpoisoned drink if you’re looking to poison your foe and over the hole with the poisoned drink if you want to pour one out for yourself. Did you get all that?

But how does it work exactly?

To show this, Steve broke his ancient assassin’s teapot and studied its design to create a transparent 2D version. Instead of using two chambers side by side, Steve’s transparent model has a compartment on top and on the bottom to better showcase how the teapot works. However, the concept is still the same, as covering the holes prevents liquid from pouring out of the respective chamber.

It’s pretty ingenious. Rather than relying on high-end technology, the ancient Chinese used natural phenomena to get their poisonous teapot to work. The assassin’s teapot would deceive your enemies by showing them you’re drinking from the same vessel when in reality, you’re drinking from another container altogether!

The rest of Steve Mould’s video is worth watching, as he delves deeper into the science behind this deadly but effective piece of ceramic.