How Do Igloos Keep You Warm?

You have probably seen an igloo before (even just on videos) and wondered just how in the world some frozen water can keep a person warm. I mean, it’s made out of ice! But according to Joe Hanson of It’s Okay To Be Smart, there are specific reasons that can explain the igloo’s ability to encourage favorable temperature: the type of ice used and the residents inside it. 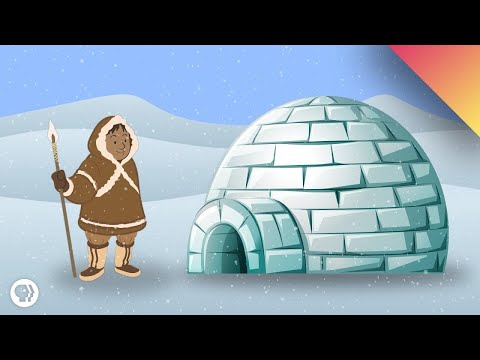 Contrary to popular belief, igloos aren’t made with solid ice but rather from freshly cut snow from the ground. Newly fallen snow is mostly composed of air, which makes it easy to carry and is a good insulator.

Folks living in the Arctic take this ground snow and arrange it in a catenary. “Catenary” comes from the Latin word “catena” – meaning chain. If you flip an igloo over, it forms a curve that looks very much like a free dangling chain. This shape is the most efficient way of making sure the igloo is stable while using the least amount of snow.

Inside your igloo, you have different levels. The entrance of the igloo is carved quite low, allowing the colder air to sink. As you reach the igloo’s body (the part where people actually live, eat, and sleep), it elevates to allow hot air to rise.

But what generates heat inside an igloo?

Why, it’s you! Your body is like a giant radiator that emanates heat. The air in the packed ice bounces the heat you give off around the igloo, causing the temperature inside to get a 40- to 60-degree increase. Of course, the more people inside an igloo, the hotter it gets. So if you want to get warm in the quickest way possible, bring a buddy into your icy abode.

Ingenious designs like this can show just how innovative humans can be when faced with a problem (in this case, it’s freezing to death). If you want to know more about, well… stuff in everyday life, be sure to check out the It’s Okay To Be Smart YouTube channel.

Descending Down a Wind Turbine Using the Emergency Exit

Best Cameras for Video This 2021