We’ve seen before creations of DIY vases, bowls, and even an eyeball. All of those things had humble beginnings as raw materials which were taken to a lathe and turned into wonderful creations. But while containers and living room pieces are great, they don’t do much in terms of entertainment.

So why not wood turn a toy this time? 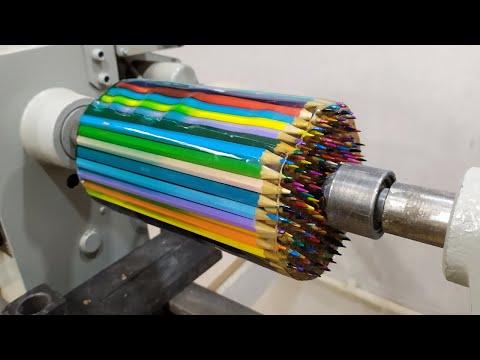 Woodworking enthusiast Ruslan Lysov took a bunch of colored pencils and turned them into a whirlabout. For those who aren’t familiar with it, a whirlabout is a Russian wooden toy that spins like a top. By pumping its mechanism, you can make it spin indefinitely. It won’t win any toy design shows, but there is simply some unrivaled fun in a perpetually spinning top.

To make this strange toy, Ruslan cast a bunch of colored pencils in some light blue pigmented resin. He poured it but stopped just before the resin had reached the tips of the pencils. After allowing it to harden, he peeled off the plastic wrap and popped the pencils on a lathe.

That was where the real work began. Ruslan carefully shaped his pencil stump down to size using his tools. After he had achieved his desired cylindrical shape, he cut it down the center using his woodworking tools before splitting it with a saw. And to make room for the spinning mechanism, Ruslan would need to hollow it.

With two smaller cylinders, Ruslan started hollowing and shaping them into their toy shapes. To allow it to spin on surfaces, he shaped the bottom half to have a pointed tip.

On the other hand, Ruslan shaped the top half differently: a rounded body with a flat upper section. He also drilled a hole on top to allow the mechanism to fit through.

After shaping everything, Ruslan did a couple of passes with some sandpaper before covering the entire thing in a wood finish.

Ruslan seemed to have glued the two halves of the whirlabout together and popped what looks like a metal drill bit into the toy.

Pump it a couple of times and watch as your friends get distracted for a few seconds. However, since Ruslan cut the pencils vertically, the toy fails to create an illusion of multicolored striped lines as it spins. With this, it doesn’t provide much in terms of spectacle. Yet, if this craft leaves you thirsty for more woodworking art pieces, you can find more of Ruslan Lysov’s projects on his YouTube channel.

Best Toasters for Your Bread