You Can Make This 3D Printed Electric Skateboard For Roughly $700

Let’s be honest: commuting sucks. When you aren’t hurrying to find a cab or Uber, you’re spending an uncomfortable journey in the back of a stranger’s car with sticky floors. Student Jack Davies was so fed up with his everyday commute that he decided to find an alternative solution.

The result is the Fusion E-Board – a 3D printed electric skateboard he designed and manufactured in less than a week.

Using a combination of sourced and 3D printed parts, Jack was able to craft a $700 board on par with other commercially available electric skateboards – most which cost in the neighborhood of $1,750.

After identifying the main components of the board (such as the truck, deck, and wheels), Jack got to simulating the parts in Autodesk Fusion 360 to ensure the materials he would be using would hold together and function properly.

He also took the motor’s location into consideration, as he couldn’t have it skidding across the pavement while the board was in motion. Since the board deck is made predominantly from flimsy bamboo, he designed a split enclosure for the motor that divides the battery and electronics and sets them at the outer portions of the board.

Jack’s inspiration for the motor enclosure takes root in the human ribcage, so it’s no surprise that it looks somewhat skeletal in design. Using an HP Jet Fusion 3D 4200 Printer, he crafted a nylon ribbed enclosure that holds all the electric parts and stays close to the board without touching the ground.

For the wheels, he used HP 3D HR PA 12 nylon parts – similar to the makeup of the ribbed enclosure components normal longboards have. HP’s nylon parts provided Jack with good heat resistance and the ability to handle excessive amounts of stress – something you need when shredding down an asphalt road. 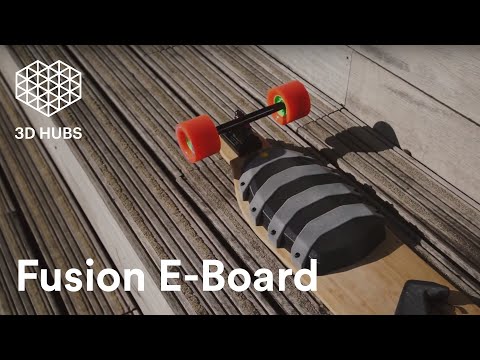 The end result is a board he controls via a small remote that propels the motor. It also somewhat functions as a traditional longboard, though you wouldn’t want to do anything too stressful on account of all the electronics housed under the board.

For more details on Jack’s printing process as well as a link to the Fusion E-Board’s files (should you decide to make one yourself), you can find the original article on the 3D Hubs blog.