It’s still pretty chilly outside during this time of year, so why not heat things up with some barbecue?

YouTube channel Totally Handy found a nifty method of turning an old propane tank into a portable grill. All you need is some paint stripper, a good rotary tool, and a little imagination. 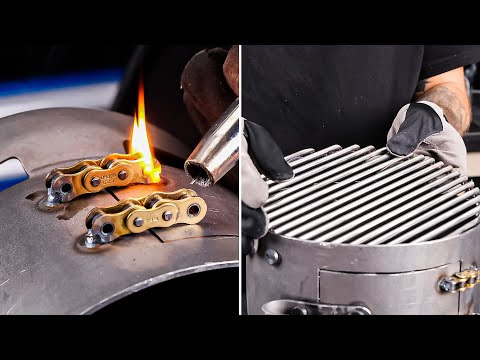 Before the propane tank could be used to cook food, it first had to be decolored and cleaned using paint stripper and water respectively. Only once the tank was cleaned could it be cleanly cut in half with a rotary saw.

This is where things get creative. The top half of the propane tank serves as the cover for the grill, so the exit hole for the propane had to be sealed off. In place of the old handle, a brand-new, lathed wooden handle was placed in between two handle holders.

The side that connects to the bottom half of the propane tank was fitted with a metal ring. That and the two hooks welded onto the bottom would make latching the two halves together much easier.

Seeing as the bottom half of the propane tank serves as the actual grill, this is where the majority of the work was done. A small hole was drilled onto the bottom and fitted with a small latch. This makes air circulation within the grill possible and will prevent any fires from dying out if the lid is attached.

As for the grill itself, two metal frameworks were crafted: one to hold the charcoal and kindling, and another to cook the food. Bolts were fitted and welded into the propane tank to suspend both frameworks.

A nifty access panel was cut into the space between the two frameworks. It was also fitted with hinges and a small handle, just to make access to the coal easier from the side.

Though I assume most people would be fine with a metallic finish, Totally Handy went the extra mile and painted the grill white. Some parts, such as the hinges, handles, and bottom, were painted black. This is to accentuate the white of the grill and make it look like something bought from an appliance store, rather than a propane tank fished from a garbage dump.

Separating the two halves is a circular piece of wood. You can store your plates and cutlery on it when traveling, and remove it when it’s time to grill. Pop in some charcoal between the two metal frameworks, throw some sausages on top, and bask in the success of a job well done.

8 Main Reasons Why You Should Always Use a VPN