It seems like just about everyone these days runs on a steady stream of either coffee or cola. When the world turns at such a blistering pace, it only makes sense for you to be able to keep up, right? Well, YouTube user The Q may have taken the expression a biiiiit too seriously… 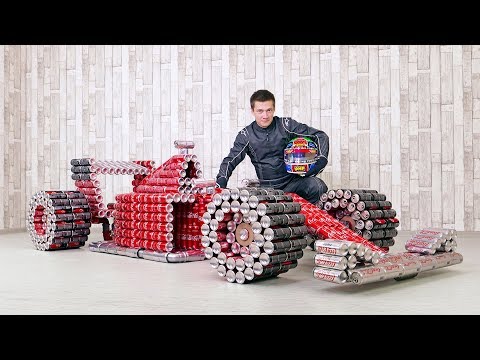 Instead of crafting a vehicle that runs on caffeine, he made one out of it. Using over 1,000 empty Coke, Coke Light, and Coke Zero cans, he built a 1:5 scale can replica of the original F1 Bolid.

The car uses over 12 meters of spray-painted PVC pipes as its base. By following the basic car outline, he was able to build a framework that can support a thousand empty aluminum cans. That’s a lot of cola, folks.

Since the Coke cans are already color coded to the traditional F1’s paint job, there’s no need to harm the ozone layer with more spray paint. All he needs now is a model picture, some creativity, and a lot of strong glue (five types to be exact) to pull this hot rod together.

Cans wrapped around the pipes are cut in half before being glued, while the bulk of the car is made from a variety of glued cans. White Coke Light cans make up most of the undercarriage and front, red Coke cans form the majority of the body, and black Coke Zero cans round off the tires and spoiler.

The way the tires are made is pretty cool. Using a single red Coke can as a base, he glues two round pieces of cardboard which separate the rims from the wheel. He then attaches many red and black cans before gluing the entire thing onto the car’s body.

Add some side mirrors, and a two-can steering wheel and this baby looks ready to go! This Coke car is totally inoperable, but that probably won’t stop onlookers from trying to get in the driver’s seat. It took over 400 hours to make this recycled speeder, but it sure was worth every second.

The Q has a ton more handmade projects, one of which is a home for a pet rat made from 600 popsicle sticks. You can find this and more of his amazing builds over on his YouTube channel.