Since his famous presentation in front of the Cupertino City Council on June 7th, 2011 (just one day after presenting at the 2011 WWDC), Steve Jobs’ vision of bringing a spaceship-inspired Apple headquarters down to earth has been slowly coming to life.

The headquarters, which Jobs wanted to build to house 12,000-13,000 Apple employees under one roof rather than renting satellite offices, is located on an old Hewlett-Packard property in the area between Tantau North Wolfe, Homestead and the 280 freeway near the existing Headquarters at 1 Infinite Loop.

”It’s a little like a spaceship landed,” Jobs said in the 2011 presentation. As we start to see the headquarters fade out of existing primarily in renderings and actually take shape in the real world, the construction does certainly look like the beginning of a spaceship being built on some mysterious earth-like planet.

More recently, YouTube user ‘myithz’ has been sharing updates of the construction using his drone on YouTube. Just two days ago, ‘myithz’ uploaded a three-minute clip of drone footage using crystal-clear 4K resolution. When seen with this much detail, its clear just how massive the 2.8 million-square-feet building really is. 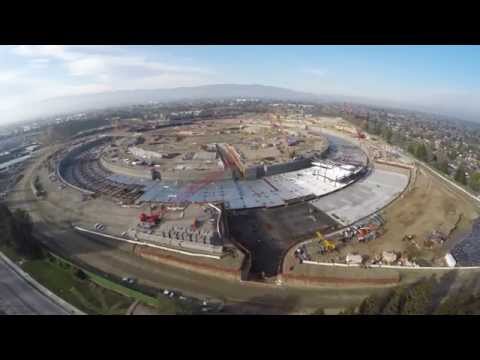 One of the more convincing arguments that Jobs gave the City Council in 2011 was that the headquarters would run entirely on renewable energy. The eco-friendly campus, which was designed by Norman Foster Design, is expected to open in 2016.

Additional details about the eco-friendly build include: