We’ve been keeping an eye out for VR/AR 3D modeling apps and, suprisingly… there’s not been much activity. Apparently we’re not in the future yet… yet… yet. There are an increasing number of ways to play in VR, but not so many ways to model in it. FEBCAD AR ­is one of the first that kinda gets us going in that direction, combining AR viewing and interaction into a 3D modeling software that allows you to create right on your desktop.


FEBCAD AR is developed by the team behind the febtop-Optimus 3D Printer/Lasercut/CNC machine. The idea to use AR came from their desire to lower the barrier for those interested in 3D printing. Through many discussions around implementing a 3D modeling software to use with their system, they considered AR glasses or mobile devices. Since most people have a mobile phone and the point is to make it accessible as possible, they went with that. Development time? Roughly three months.

In the AR environment, the idea is that you create your design by drawing basic shapes on the desk in front of you like boxes, cylinders, pyramids, spheres, cones etc., while looking through your phone or tablet. You can move and place objects naturally anywhere you want, and easily view your creation from any angle by moving your phone around the design. When you feel done with your design you can simply export your 3D model to the STL format. You also have the option to send the design for direct printing on one of our 3d printers, Optimus or Nimo 3D. Optimus is our modular, premium 3D printer developed for makers, product designers, engineers and artists. It is very robust, adaptable and low maintenance. The Nimo 3D is our smaller model and is designed for everyone. It is very affordable and easy to use.

Their main goal was to make the app useful, yet simple; usable to easily model simple designs, yet not just a gimmick. Their next goal is to incorporate the features needed to draw something useful without making the interface more complex.

What can you do with the app right now? The first set of features include:

Here it is in action: 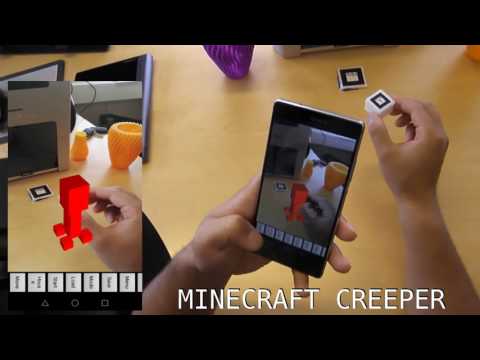 Now, I know what you’re thinking. “That has got to be the most grueling way to create 3D models I’ve ever seen.” I’m thinking the same, however they make a good point about making it more accessible–many people just don’t have VR/AR headsets. I look at FEBCAD AR as a proof of concept–The ability is obviously there–and I’m positive 3D software developers are conducting surveys, testing a headset or two and imagining the type of interfaces that haven’t been imagined yet.

Perhaps the next step is using the Microsoft Hololens with something similar to Google Soli interaction. No holding a screen in one hand and a tiny block in the other.

If you are interested, you can get on the FEBCAD AE beta via their site at febtop.com.

OpenKnit is the Open-source Machine for Bespoke Clothing Creation