With a childhood that consisted of designing and building his own toys from the age of five or six, to a career history that spans the fields of animation, graphic design, interior design, carpenter, scenic painting, welding, writing and acting, hosting Mythbusters seems like a natural evolutionary step for the show’s Adam Savage.

Savage, along with co-host Jamie Hyneman (whose own background consists of everything from certified dive master to wilderness survival expert) have what many might consider a dream job: testing the validity of rumors and myths from various sources of entertainment including movie scenes, adages, internet videos, news stories and anything else that seems like a good idea to test.

When not testing the validity of rumors and myths, Savage can be found in his famous workshop where he hosts a series the One Day Build series of YouTube shows – where he documents the build process for everything from a box for displaying his Blade Runner Blaster prop replica to Barbarella’s Space Rifle from scratch.

More recently though, Savage took on the task of building his own replica of the Star Trek Captain’s Chair as used by Captain Kirk in the popular TV show – inspired in-part by the frustration of a bad Ebay impulse buy.

For Star Trek fans who love to watch a little bit of problem solving and more in-depth build processes, adding this to your watch queue is a must: 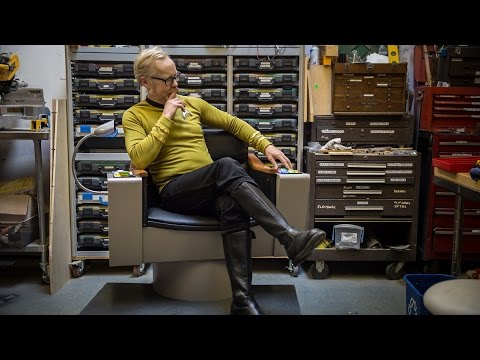 You can check out the rest of Savage’s One Day Build projects (and tons of others like it) by heading over to the Tested YouTube Channel page.