A body camera functions like a dash cam that can serve as a piece of proof in case any unexpected, unfavorable event happens to the user. Due to its size, it can be easily fastened without putting much weight on your clothes where it is commonly affixed. It also commonly boasts long battery life, great resolution for image quality, and substantial data storage. In addition, its night vision capabilities combined with infrared (IR) imaging can be incredibly beneficial for anyone in the security field.

While body cameras are becoming widely popular amongst enforcement personnel, there are likewise several great choices available intended for civilian users. Given the possibility of dangers lurking around, having one is necessary to give yourself the protection you need.

That said, if you’re looking for one, there are lots of choices to choose from. To help you decide, we've put together a list of the best body cameras, as well as some pieces of advice from Evangeline Summers, a California-based professional photographer.

Here is the comprehensive list we prepared for you... 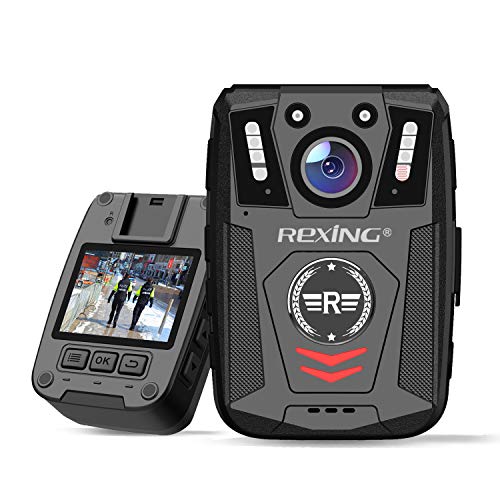 This Rexing P1 Body Worn Camera is unquestionably one of several nicest body cameras, with such a style that seamlessly blends with functionality and versatility. The maximum resolution setting on this body camera is 1080 P, which is adequate enough for its purpose. The P1's ultra-wide-angle lens with a 170° field of view is something you’ll love, as well. Also, a  64 GB built-in memory and the loop recording allows generous recording of footage.

“Having been using Rexing camera products for years,” Summers said, “I have never been dissatisfied with any of their devices. This body cam can compete with other options on the market due to its high-quality audio and video resolution. The photos are detailed enough to capture important information.”

Summers also stated that the night vision capability is exceptional in recording detailed images from up to 15 meters away, even within total dim settings.

“Its vision has a long reach at night and almost no vignetting which is amazing,” Summers said. “The sound however is just like what you would expect from other body cams. It can’t filter background noises but it is still powerful enough to record conversation between you and another person who is at least 15 or more feet away.”

This MIUFLY Body Camera is a great optimum body-worn camera available in the market, with a rugged design, strong audio-visual data recording capabilities, and a slew of other functionality.

“This MIUFLY Body Camera is a gem on Amazon,” Summers said, “Besides the common features like IR lights and battery capacity, it offers you a GPS and a 16X optical zoom which is very rare in this kind of cam.”

Besides the clarity of the footage filled with sufficient details and brightness, Summers also praised the good audio of the camera.

“The audio is also really good and there is a built-in microphone that captures audio exceedingly fine. With highway traffic speeding by, I can easily understand what people are saying on replay,” she ended. 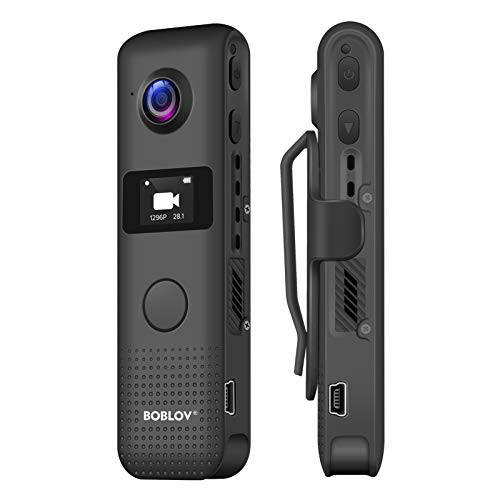 BOBLOV C18 Wi-Fi small-body camera is one of the top brands in the market. One of the best features of this body camera is the auto white balance and auto exposure. This is surprisingly good, so when you travel from dark to light areas, the auto-exposure will do an excellent job of adjusting the cam to deliver clarity in each footage.

“This is a kind of pretty good value,” Summers stated, "Besides the flexibility you have in choosing the resolutions of the videos and photos, the camera has a great, well-thought build. I like that the camera has a 1/4-inch tripod thread on the bottom coupled with motion detection because I could use it as a standalone security camera. Also, the possibility to use it on a tripod helps a lot while using the app to control the camera from my smartphone, but I'd have to be appropriately close to the camera. Keep in mind that I can't use the app to control the camera from a distance of more than 45-50 feet while using Wi-Fi mode."

It's very handy to use. The only controls are two buttons on the side and a big ‘OK’ button on the front. When you press the On/Off button, the camera powers up and goes into video recording mode right away. A single press of the OK button begins video recording, and a second press stops it. If no recordings are being made, the camera would switch itself off within a user-defined time such as 1, 3, or 5 minutes to save power. Lastly, when recording continuous video, it will be automatically divided into clips of 5, 10, or 15 minutes, depending on your preference.

This GUARDIAN G1 Body Camera delivers an exceptional 1296 P full HD recording at 30 FPS, ensuring that the G1's video playback is smooth and excellent. Its 140-degree field of view has an ultra-wide-angle that can view two to three lanes of the road when used as a dashboard camera.

She went on to say that having the ability to plug in your earphones to the camera when viewing playback to hear the sound is an absolute advantage and convenience. Furthermore, it has a X2 to X64 speed rewind and forward while its menu interface is very user-friendly. Summers also commended the battery performance of the body camera which, according to her, “could survive your entire shift each day.”

“The battery life on this body camera is absolutely great! It can last up to 10 hours mostly on the second-lowest resolution setting at 720 P and 6-and-a-half hours in 1290 P setting. It's also worth mentioning that the camera can be left on standby for up to 240 hours. Hence, this is one tough body camera you can trust,” she added. 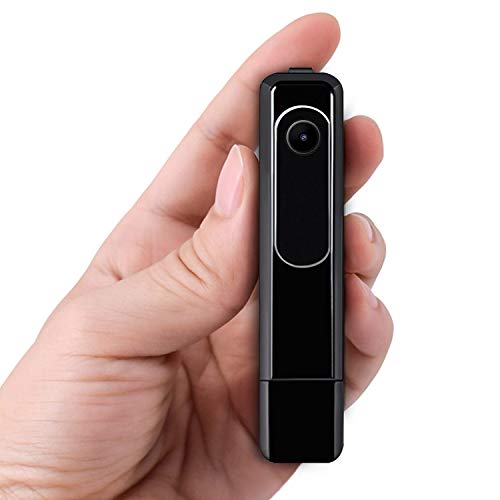 This Ehomful Spy Pen Body Camera is a lightweight and compact body camera that also functions as a spy camera in the style of a pen. You can use it right out of the box because it only has one button that allows you to record or pause the recording from time to time.

This body camera has a 140-degree field of view and captures spectacular 1080 P at 30 FPS HD video without any flickering. It is operated by a rechargeable lithium battery with a battery life of up to 180 minutes on a single charge.

“The short battery life of this camera is somewhat reasonable because of its small body,” Summers said, “This is a small flaw if you would just realize how incredibly Ehomful has designed this body cam. Compared to Rexing P1, it is smaller which means concealing it is much, much easier. You wouldn’t even know that it is a camera until you get a closer look at it!”

The most important features we need to look for in a body camera are high resolution and smooth video quality. The most normal resolution is 1080 P at 30 frames per second, which would enable us to record in good quality without spending a lot of money. Unless we want a smoother video, we can always go up to 60 FPS, or we can go below to 24 FPS intended for slow-motion effects. Over that, we can likewise have 4K at 30 FPS, which is much smoother and clearer, but it comes at a premium cost.

As with everything that is constantly worn and transported, durability is vital for a body camera. If we're in enforcement agencies, we'll like something that meets MIL-STD 810G, a classification that guarantees laboratory-tested shock and drops resistance. A waterproof certification is also relevant, with IP65 indicating that the device is resistant to dust and can be submerged in water for up to 5 m. IP scores range from high to low, with IPX indicating zero dust resistance and therefore only water resistance.

Since we can't instantly recharge a body camera if we're wearing it all day, battery life is critical. The capacity of the built-in battery varies, but it usually ranges from 1000 mAh to 3000 mAh. In an idealistic situation, we'd like a body camera that can last us an entire 8-hour work shift. However, because the size of the battery must be measured with the body camera’s lightweight and compact structure, several body cameras will not last a maximum of 24 hours. Yet another choice is to purchase a body camera with several batteries so that we can switch batteries out once it ends up dead.

This has something to do with the storage capacity of the body camera. We must make sure that the camera has enough memory to store our recordings. Various body camera models provide different storage capacities that vary based on their purpose. For example, law enforcement personnel need to have a huge storage capacity to function as needed during their shift. By contrast, body cameras used mostly for informal video footage have such a limited amount of memory. The best part is that, intended for selected body cameras, we can expand the storage size via Micro SD cards.

Some of the extra features that distinguish a body camera from others include an LED light, a built-in microphone, night vision, and a playback option. The camera's resolution is essential for capturing data, and proper lighting is also important in low-light conditions. Furthermore, the combination of a body camera and a microphone is more effective than the footage alone. Keep in mind that for pre-event video, some cameras may not have the microphone turned on. Similarly, night vision capability excels at capturing detailed images from up to meters away, even in complete darkness. Also, the camera's ability to retrieve footage is smooth, transparent quality is improved by the playback capability. The storage and other quality details of a body camera have much to do with its playback power.

How easy would it be to use a body camera?

It's very easy. Many body cameras record using a basic "one-button tap" or a "double-tap" operation, which prevents the camera from being accidentally switched off and on while also making it incredibly simple to use.

Can a body camera's battery life last for a complete shift?

That relies entirely on how much we use it. As with our mobile phones, if we leave our body cameras on constantly using, we can anticipate the battery may die earlier. Keep in mind that when we use only the internal battery, we can expect a battery life of between 2 to 12 hours for every charge, depending on the brand and model and depending also whether we are using it on a recording mode or a standby mode.

Is it possible to use the footage our body camera recorded as evidence in court?

Yes, if it happens to catch any illegal activity on camera. It's also worth noting that while the video isn't often as convincing in a court of law as one would hope or assume, it's still preferable in relying on eyewitness reports like video evidence.

Is a body camera continuous in its recording?

It is not needed, but it is possible. After the record mode is activated, the body camera can continue recording until the user ends it, the storage is full, or perhaps the battery runs down.