Volocopter Redefines Our Flight Of Fantasy

Many notches above a regular drone and radically different from the helicopter, the Volocopter has carved its own niche and is one ride that we are awaiting with much anticipation. Apparently, once its given the air-worthy green signal, German residents with a private pilot license will be able to fly  e-volo’s Volocopter in the near future. Time to relocate to Germany. 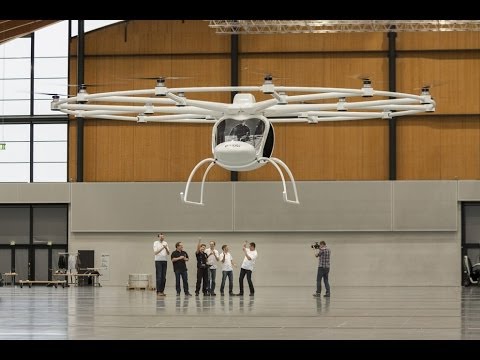 Designed as a helicopter with 18 propellers, this antler-esque flying machine is battery-powered and emissions-free. According to the makers it works on the same principles as the quadcopter drones but has a cockpit that seats two fliers. The first radio controlled flight saw the two-seater VC200 fly up to the 72-foot ceiling of the dm-arena in Karlsruhe, Germany.

The first test ride of the volocopter saw it rise nine times, clocking in a total airtime of 20 minutes. Since it is not yet certified, the flights were remote controlled and without any passengers. Once commercially ready for use, you can expect to take your VC200 up to 6500 ft altitude and cruise the skies at a cruising speed of at least 54 kn (100 km/h). The flight can has a maximum take-off weight of 450 kg and can cover more than one-hour flight time. The cockpit is constructed for two persons side-by-side seating, with no doors. Stay buckled in buddy.