While nearly any tech or mechanical junkie can appreciate a hulking giant robot, one should always leave room to admire its smaller brethren. Sure, bigger may be better, but giant robots don’t always have the level of precision that many smaller robots come equipped with.

Delta robots consist of three individually controlled arms connected to joints at a single base, making them ideal for manufacturing, packaging, and welding. Going as far back as the early 1980s, where professor Reymond Clavel and his team designed them for use in a chocolate factory, these tri-armed machines are extremely precise in their operations—no matter what size they may be.

But what if they could be made so small that they could work at the micrometer level, effectively increasing their precision while reducing the space they occupy?

This is the question Robert Wood and his team at Harvard’s Wyss Institute for Biologically Inspired Engineering and John A. Paulson School of Engineering and Applied Sciences (SEAS) are trying to answer with their new milliDelta robot. 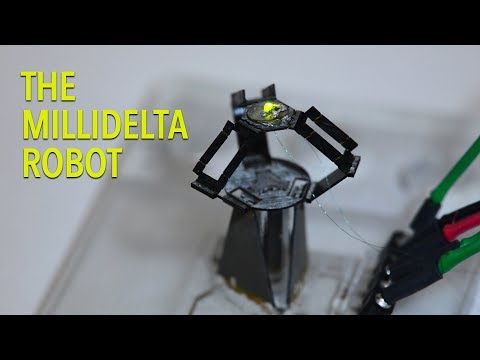 The name couldn’t be easier to explain: it is a millimeter-sized Delta robot meant to work at the micrometer level.

The technology has its genesis way back in 2011, where the team was inspired by pop-up books and origami to create a method of micro-fabrication which uses flat sheets of composite materials. Combining this composite laminate structure with flexural joints (smaller versions of a Delta robot’s more complicated joints) and piezoelectric actuators, the result is an industrial robot roughly the size of a penny.

To be exact (excuse the precision pun), the milliDelta measures 15mm x 15mm x 20 mm. This allows it to not only work at a more precise level of five micrometers (μm) but also operate at frequencies of up to 75Hz (about 15-20 times faster than standard Delta robots) and accelerations of 22g. Being small doesn’t hinder it from working on heavier loads either, as it can carry up to three times its mass.

While manufacturing is its general purpose, being able to operate with such speed and precision on a workspace of seven cubic millimeters spreads its potential applications into other fields; the team is already looking to apply the milliDelta to micromanipulation and microsurgeries (albeit at possibly lower frequencies to prevent injury).

You can find all the details on this miniature manufacturing marvel over at the Harvard Wyss Institute’s webpage.

Yeti Cycles Is Looking for Both Design and Composite Testing Engineers