Lasers vs. plastic extruders. We all know laser cutters are superior to 3D printers. Mostly, because you can’t put plastic extruders on sharks (or any other sea creature) to make them even more vicious. It also turns out that laser cutters are a tad faster at fabricating certain items…. as long as it’s flat and not overtly complicated. That is until some clever young students from the Hasso Plattner Institute decided to use a laser cutter to both cut and melt the plastic products they create. The result? LaserOragami, a project that cuts a whole new approach to product design.

A mobile phone cam created by 1) 3D Printing 2) Traditional laser cut finger joints and 3) LaserOragami with LaserOragami completing a ‘fully-assembled’ product in a fraction of the time.

Stefanie Mueller and Bastian Kruck under the supervision of Patrick Baudisch will present the project at the upcoming CHI 2013. The focus is on extending the capabilities of a standard laser cutter. As you may have experienced, a laser cutter is quite as good at burning/melting materials as it is cutting it, depending on the strength of the laser and the distance from the material. They used this to their advantage with a little help from that thing called gravity. From Mueller:

The key idea behind LaserOrigami is that it achieves three-dimensionality by folding and stretching the workpiece, rather than by placing joints, thereby eliminating the need for manual assembly. LaserOrigami achieves this by heating up selected regions of the workpiece until they become compliant and bend down under the force of gravity. LaserOrigami administers the heat by defocusing the laser, which distributes the laser’s power across a larger surface. LaserOrigami implements cutting and bending in a single integrated process by automatically moving the cutting table up and down — when users take out the workpiece, it is already fully assembled. We present the three main design elements of LaserOrigami: the bend, the suspender, and the stretch, and demonstrate how to use them to fabricate a range of physical objects. 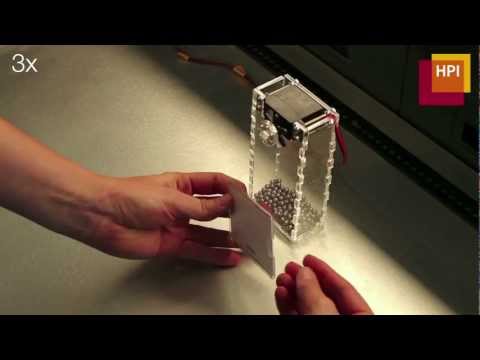 As the video above shows, the process is quite simple. The laser cutter begins by making the initial cuts, proceeds to melt the plastic at the bends (rotating the piece if necessary), then making the finish cuts to separate the object. The idea is brilliant and the results, while limited, speak for themselves. From the product development perspective–creating quick mock-ups, form supports or even products–a desktop machine with software that gives engineers and designers these capabilities couldn’t happen soon enough.