Modeling a 3D object and prepping it for 3D printing on a 2D screen sounds counterintuitive… because it is. You’re stabbing your mouse at a 2D plane in 3D space to make something which can be interacted with in the real world. I thought we were in the future? So, what if you could design the object in 3D as it is printing in 3D? *pop* 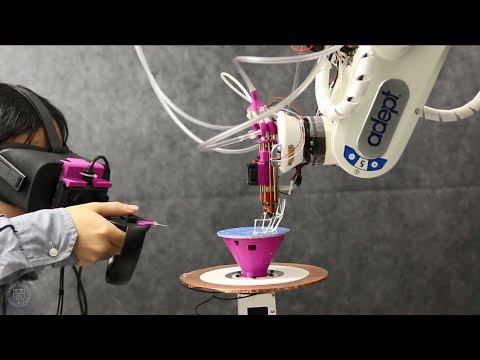 Here’s how it works: Just like any homegrown 3D printed object, you first sculpt the design in 3D space. This is done through an AR headset which allows you to model simple shapes using the HMD controllers. These shapes can then be changed into whatever crazy contortions your mind can come up with through an AR controller. Once you set and confirm your model, the robot arm begins printing.

This is where it gets fun. As the 3D printer starts sculpting the object, you can start modeling other parts of the object via the controller. In the case of this teapot, a spout is added to the front while the robot works on the back of the body. This does not stop the production process unless you put your hand on the printing platform and move it around.

Should you ever choose to work on something on the back of the object (which in this case, involves adding a teapot handle), you can simply place your hand on the platform and rotate it. Doing this causes the printer to cease printing; it will only resume once you’ve taken your hand off the platform. Leaving the printing area lets the 3D printer take control of the platform to finish its work.

Aside from creating objects from scratch, the RoMA can also be used to add features to existing objects, such as a stand for a toy fighter jet.

It’s a far cry from perfect, but RoMA could allow you to capture the process in one go–model, print, check and optimize. Could it get a little awkward going at it with a robot arm over the shape. No more than usual, right? We are thinking, however, laser and some sort of molecular bonding needs to happen in order to make modifications to the structure a little easier. V2? We hope so.

The entire paper (pdf) detailing the specifics of the RoMA is available online, so if you want to get into the nitty-gritty of this interactive AR CAD 3D printing process, go give it a read!